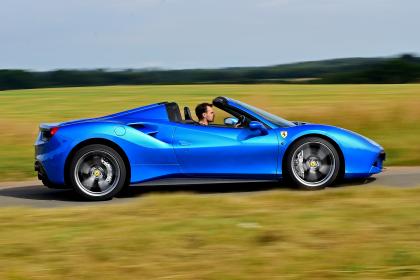 The launch of a new mid-engined, two-seat Ferrari convertible is always a special event – it’s all about excitement, glamour and noise. We last drove the Ferrari 488 Spider nine months ago in the Ferrari’s natural habitat of the rolling hills surrounding Modena, Italy. But now is our chance to get behind the wheel of a right-hand drive version in the UK.

The 488 GTB Coupe is one of the performance cars of the moment, so lopping the roof off is a sure-fire way of guarantying extra sales. That’s the philistine’s view; to everyone else the Spider represents something extra special.

The 488 Spider carries over the retractable hard top first seen on its predecessor, the 458 Spider. It’s a clever arrangement – a pull on the button mounted on the centre console sees the metal roof above the driver’s head fold backwards. At the same time a small cover in front of the engine bay rises up and the roof peels back into the gap. It’s clever and quite spectacular to witness; it takes just 14 seconds and unlike on the 458, it can be done at speeds of up to 30mph. 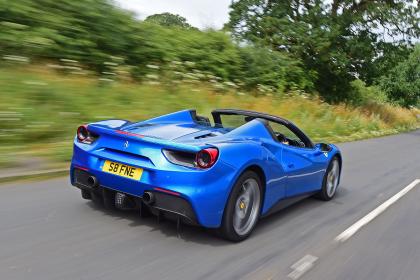 When the roof is down, a three-stage glass wind deflector allows you to travel along at motorway speeds holding a conversation with your passenger with ease. But if the weather takes a turn, putting the roof up doesn’t mean the V8 howl is lost – you can lower the glass wind deflector between the flying buttresses, allowing the engine’s fabulous noise to travel uninhibited into the cabin.

Moreover, with the roof up, the Spider manages to look prettier than the GTB. Put the roof and windows down and the Spider is one of the most elegant modern Ferraris since the 355 in our eyes.

The Spider is certainly one of quickest ever drop-top Ferraris, too. The GTB’s 3.9-litre twin-turbo flat crank V8 has been carried over completely unchanged meaning there’s 660bhp and 760Nm of torque at your disposal. In fact, it’s all about the torque with this engine because it peaks at just 3,000rpm. The result is so violent Ferrari’s engineers have limited the amount of torque available in the lower gears to try and smooth out the delivery and avoid what every keen driver hates in a turbocharged engine – lag. 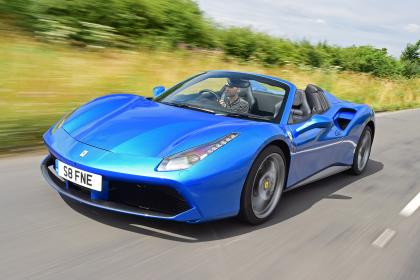 And, my word, Ferrari has done a good job. There’s absolutely no hesitation from the engine whatsoever as it responds immediately to what you right foot is doing with the throttle pedal. The dash from 0-62mph takes three seconds and while that’s just as fast as a McLaren 650S Spider, the 488 Spider feels quicker. Apart from the odd ‘whoosh’ you would have no idea the engine is turbocharged, and while it does fall a little short of the old 458 Spider’s whaling 4.5-litre naturally aspirated V8 for aural pleasure, the 488’s V8 is still a masterpiece.

Despite having its roof taken off, Ferrari claims the drop-top has the same structural rigidity as the coupe, which is quite an achievement. But Ferrari had to work hard in this department as the 488 Spider’s rival from Woking, the McLaren 650S Spider, can have its roof lopped off with no detriment to rigidity thanks to its carbon tub. While there is the merest hint of wobble when you’re cornering hard or if you hit a bump mid-corner, the 488 Spider is impressively rigid.

With this strength, the Ferrari shows that it’s no open top poser’s car. Indeed, it comes with all the clever technology the GTB has such as the active aerodynamics to boost stability. The Spider also gets Ferrari’s armoury of driver assistance tools, including adaptive dampers and Ferrari’s clever side slip angle control system. It loosens the reins of the traction control system allowing you to elegantly slide the rear end before the system intervenes and gathers it all up for you. 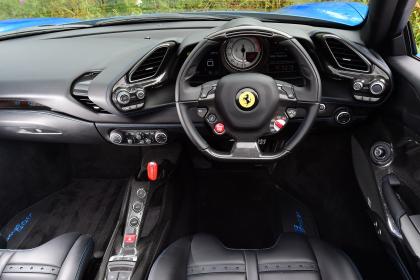 Add in light and accurate steering, razor-sharp seven-speed dual-clutch gearbox and slightly recalibrated suspension – in its ‘Bumpy Road’ setting’ the Spider rides better than most German executive saloons – and it’s a intoxicating package.

The interior is comfortable too – the driver-focused arrangement works well with two pods acting as your entertainment and car information hubs, visibility is generally good. With all of this, you start to wonder why you’d want the GTB.

Well, there is the question of a ￡20,000 price hike but at this price point, it’s a small leap for something that adds so much extra drama and excitement to an already thrilling and outstanding package.