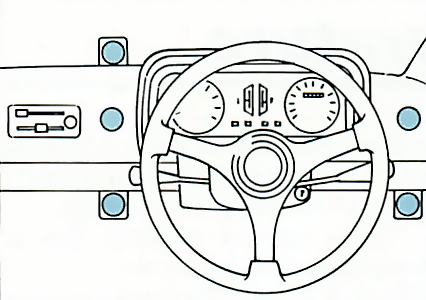 Oil temperature gauges can either be mechanical or electrical. Below is an example of each type of kit. The Lucas mechanical gauge kit consists of the gauge with capillary tube and sender unit (A), and adapter nut and sealing washer (B). The TIM electrical gauge kit consists of the gauge with wiring (C) —which may be mounted via brackets and fixing screws (D) or via an adhesive pad (E) — cable ties (F), sender unit (G), adapter nut (H), and nut, washers and terminal connector (I).

The working temperature of your engine is normally kept to an optimum level
by the cooling system. But there are occasions when your engine is worked
harder and reaches temperatures higher than normal. This can happen, for
example, when you are towing a trailer or another vehicle, or if your engine
has been tuned for higher performance.

As the temperature of your engine increases, the engine oil becomes thinner
and thinner. If the engine is run above normal temperature for a long time,
there is a danger that the oil may become so thin that it can no longer
lubricate the moving parts of the engine properly.

If this happens your engine can become seriously damaged to the point where
it has to be stripped and rebuilt or replaced completely.

These gauges measure the oil temperature with a sender unit, similar to that
used for water gauges, which fits directly into the sump pan to give an
accurate reading of the temperature.

The gauges are available from accessory shops and are either mechanically or
electrically operated.

The gauges are mounted either directly into the dashboard or in a bracket
suspended under the dash.

How the sender unit is fitted into the sump pan depends on the type of gauge
you have and the model of your car. In some cases the sump pan will have to be
removed and a hole drilled and tapped with a thread to accept an adapter.

Other types use the drain plug in the sump as the fitting position for the
sender unit. Again you may need an adapter to fit the sender.