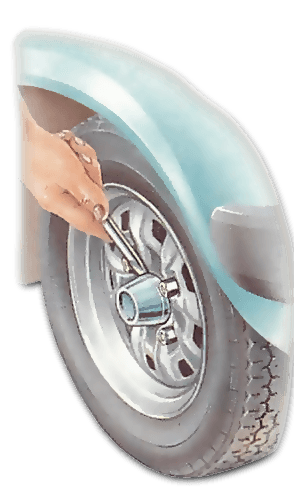 Loosen the wheel nuts before jacking up the wheel. Use a large spanner and bar to get extra leverage on a crank-handled wheelbrace if necessary.

When you take the wheels off to inspect the tyre walls, clean the wheels thoroughly and look closely for cracks starting around the stud holes, and at the joints between the rim and centre.

Cracks may indicate structural weakness due to corrosion, or that the wheel nuts are either too loose or are over-tightened. Such damage means that the wheel should be replaced.

Damage to wheel rims is much more common, as it can happen while parking against a high kerb.

Look for deep scuff marks, buckling and denting on steel rims, and for chipping and splitting on aluminium or magnesium alloy wheels.

If the denting is not too severe, steel wheels can usually be straightened by a garage. But they may no longer make an airtight seal with a tubeless tyre. Fitting an inner tube may solve the problem.

However, a damaged rim may also make the wheel difficult to balance.

Very minor chips or scrapes on alloy wheels can be ignored, but cracks are serious – fit a new wheel.

Magnesium alloy wheels corrode badly if their protective lacquering is disturbed – or eroded by time and flying grit. Frequent inspections should be made for that sort of damage, and the wheels re-lacquered if necessary before corrosion can set in. There are proprietary lacquers specially for car wheels, and instructions for applying them are given on the container.

Steel wheels can rust, but they are made of metal thick enough to withstand all but the most vicious attacks, well beyond the useful life of the car.

However, rusty wheels are not an attractive sight, and can be prepared and painted like any other part of the car (See ).

A persistent, slow loss of pressure from a tyre can be due to a faulty valve. Whenever a tyre is taken off, new valves should be fitted. Leaving the old ones in is a false economy, as the rubber seating around the base of the ‘snap-in’ type of valve stem used with tubeless tyres eventually deteriorates.

The inner core of the valve also deteriorates with age – especially if the valve cap is missing, allowing `dust and grit to enter.

Look carefully at each valve for cracking or hardening of the rubber covering around the stem.

Unscrew the cap and check that no dirt is trapped underneath, then replace it tightly. Remember that it forms a second pressure seal, as well as a protective shield.

If you suspect a valve leak, wet your finger and wipe it over the valve to cover it with an unbroken bubble. An air leak will burst it.

Inner tubes, when fitted, have integral valve stems which cannot be replaced. Always have a new inner tube fitted when a worn or damaged tyre is replaced.

Because front tyres usually wear faster than rear tyres, wheels are sometimes rotated – switched from one position to another – in order to equalise the tread wear. The practice is not recommended.

Wear on the front wheels is often greatest on the outside shoulders, so the best way to equalise wear would be to have the tyre removed from the rim, reversed on the wheel and rebalanced. The cost of having this done could offset any saving in tyre wear.

Some manufacturers believe that changing the wheels round makes a car’s steering and roadholding unpredictable until the tyres have established a new pattern of wear.

Rotating wheels means that all four tyres, plus the spare, are likely to wear out at the same time. Changing a pair of tyres on one axle at a time, bringing in the spare at each stage, spreads the cost of replacement.