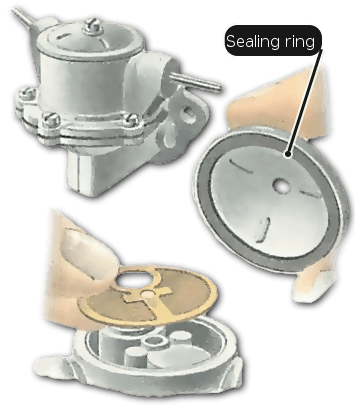 The most common type of pump; if there is a sealing ring, check it.

A blocked fuel-pump filter will cause the engine to cut out intermittently, particularly at high speeds, and it may stop altogether.

Not all cars have a filter in the pump. Later models often have sealed, filterless pumps which do not need maintenance, and rely on filters elsewhere, mainly in fuel pipes or the petrol tank, or at the inlet to the carburettor float chamber.

Many cars have a mechanical fuel pump driven off the camshaft. The pump should be plainly visible on one side of the engine. If not, trace the fuel pipe back from the carburettor.

If the fuel pipe leads away from the engine towards the fuel tank, you may have an electric fuel pump. Often this is at the back of the car, close to or immersed in the tank.

Disconnect the battery before servicing an electric pump – an accidental spark could ignite spilled petrol.

Clean all filters by washing them with fresh petrol. Wipe out the inside of the pump with a clean lint-free rag.

Make sure sealing gaskets are sound. Replace them if necessary. There may also be a sealing washer under the fixing screw.

Do not overtighten the screw(s) of the pump cover or it will leak and damage the pump. If the knob retaining a glass dome is overtightened, the dome may break.

Many electric pumps are SU, or copies built under licence. They are often in awkward positions, but must be removed to clean the filter.

Have two old pencils or rubber bungs handy to stop petrol gushing out of the disconnected fuel pipes.

Note which pipe is which – the same applies for electrical connections. There may be one or two, depending on whether or not the pump is earthed directly to the car body.

Filters fitted to most mechanical pumps