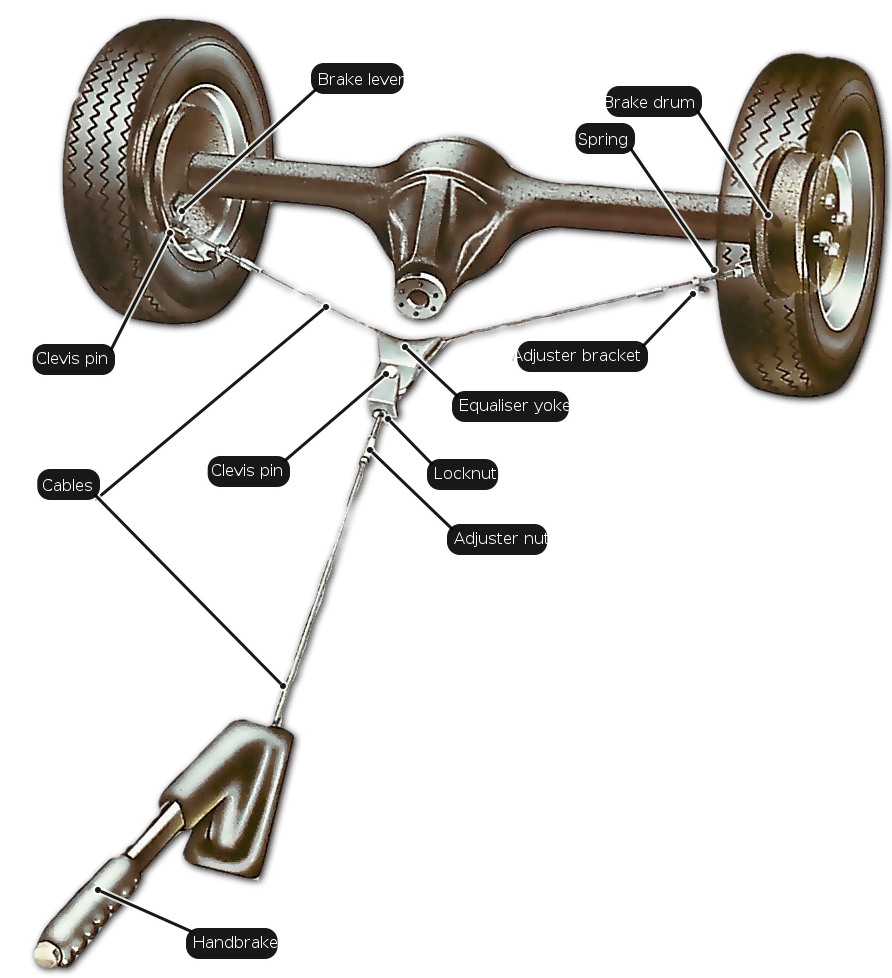 Hand brake cable layout The car varies from vehicle to vehicle, but only a limited range of types of components.

For example, although you may find an adjustment screw between the brake lever and the wheel almost anywhere, it can be treated almost in the same way.

Even in front of a number of car handle the front wheel working system is similar.

Cable extension. They need to be checked regularly and lubricated, and adjusted if necessary.

A more serious problem is fraying cables, which can suddenly break. Moving parts may also rust and stick, so that the handbrake cannot be applied or released fully.

Loosen the wheel nuts of the (hand- braked) wheels before raising that end of the car, and chock the other wheels on both sides. Raise the car on axle stands placed so as not to get in the way of the mechanism. Remove the raised wheels.

Look over the whole length of the cables for fraying, particularly at sharp bends.

Check for cracks where cables run inside a flexible outer casing — they can let in water and cause rusting.

See that all parts are clean, sound and lubricated. If necessary, smear them with brake or anti-seize grease.

At longer intervals — about every two years — dismantle all the moving parts, using the same method as for renewing a cable.

Clean everything thoroughly and check it for wear.

One common trouble, which reduces braking power, is clevis pins becoming `waisted’ — worn away in the middle.

Renew a waisted pin and always use a new split pin or spring clip when reinserting a clevis pin.

Grease all parts during reassembly, including the threads of adjusters.

One or two cables may be leveraged. They usually start on the floor, passing through a fixed baffle plate.

Dual cables are fixed, usually by adjusting the screws on both sides of the lever. One brake per cable. They were adjusted separately.

A single (primary) cable is fixed beneath an arm, usually through pegs. This may be a regulator. Sometimes there is a pole instead of a cable.

The rear end of the cable may carry an ‘equaliser yoke’ — a transverse sliding guide.

Another (secondary) cable runs freely across the equaliser, each of its ends being connected to one of the brakes so that this Y- shaped arrangement divides the pull equally between them.

There is usually an adjuster for the primary cable in front of the equaliser, and for the secondary cable on one side only.

Often, you remove an equaliser to free the cable from it.

Parts of either cable may run inside flexible outer casings. The casings are held at their ends by abutment brackets on the frame.

Usually, one end of a casing is a long, threaded tube which can be adjusted on the bracket by locknuts.

Some cars — for example the VW Beetle — have rigid outer tubes instead. When removing a cable from such a tube, tie a string to the cable, draw the string through the tube and leave it in place to pull the cable back.

Instead of a Y-shaped equaliser layout, some cars have a single cable linking the brakes around an equaliser fixed to an adjustable rod on the handbrake lever.

The cable runs around a compensating bracket, sometimes via a pulley, and to one of the brakes.

From the bracket a third cable (or sometimes a rod) runs to the other brake, in such a way that the compensating bracket equalises the pull between the brakes.

A cable may be connected to the brake itself outside the drum or caliper, usually by a clevis pin. Often a drum has an inside connection, in which case you have to remove the drum, and also usually a spring and sometimes a clip inside the drum.

Whatever the details, all connections are by normal clevis pins with split pins or spring clips, by ordinary nuts, bolts and screws.

So long as you note the details, handbrake reassembly should not be a problem. Always renew all split pins and spring clips.

Early mini-skirts and similar Leyland front-wheel drive car cables run through the channel and the quadrant-shaped industry in the rear radius of the arm. The system is prone to rust and stick.

Unleashed the department and took it with the penetration of oil. Disconnect the cable from the brake back panel. Leverage or leverage and the fourth sector.

Grease the industry and channel the way to reconnect the cables.

Note that the cable industry you are removing is held in two places. Clamp part of the cable open; closed after re-assembly

Mini, cable in the department at the back radius of the arm. Maintain the main oil to prevent it from seizing.