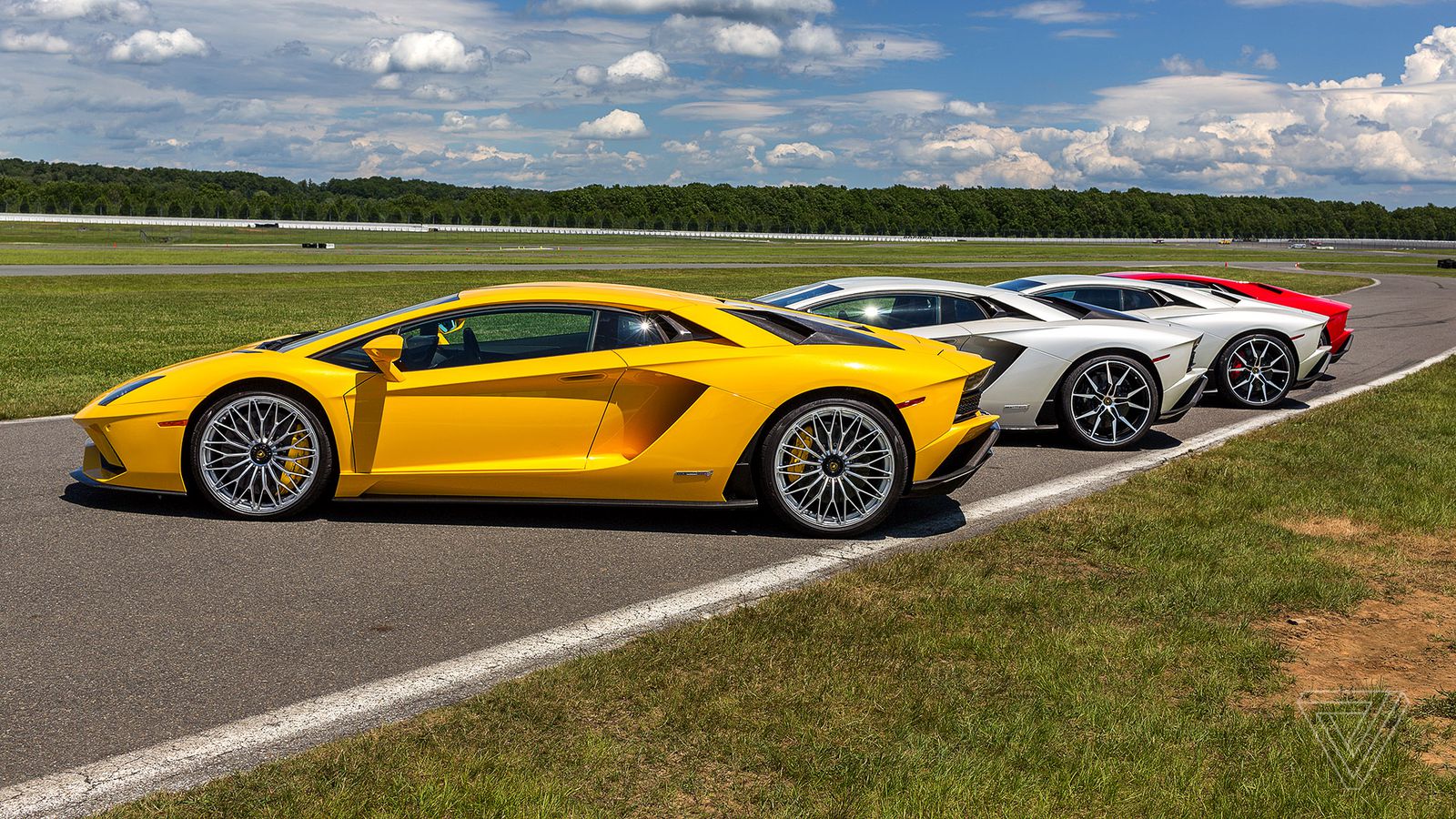 From up above, I spotted the trio of Lamborghinis parked in formation. The unmistakable sharp, angular forms cast in red, white, and blue sparkled in the sunshine. My heart jumped as the helicopter descended onto the Poconos Raceway in Pennsylvania. The effect was as it was orchestrated to be — stunning and seductive. I was part of an effort to woo a small cadre of journalists on the attributes of the Aventador S, or at least to give us a glimpse into how some Lamborghini customers use their sports cars.

Lamborghini will sell this spiked-up version of the six-year old Aventador for $422,000, as one co-worked pointed out, the cost of 84 24-karat gold NES video game systems, a system The Verge called the “most unnecessary, luxurious, awesomeness ever made.” Still, the Aventador S shares much in common with this gaming system, at least in spirit and in target audience. While some might opt to drive the car to the track, customers in the market for a new Lamborghini typically own at least half a dozen other ultra-luxury rides that they could use to drive (or be chauffeured) to their local heliport, as their handlers gas up their new ride and detail the wheels. That’s what I imagined, as the distinctive Italian-born brand spared no expense whisking us from Manhattan to the Poconos to show us how this car’s technical proficiency outshines the base model — on slick turns that open up into a delightful straightway on the family owned track, where NASCAR and Indy car races will take place later this summer.

This over-the-top effort to convince me of the Aventador S’s wicked ability was persuasive. Building on the Aventador form, the S is a work of improved technical savvy that’s a byproduct of its parent company Volkswagen’s R&D arm and user experience team. It’s even equipped with Apple CarPlay and it has a racing video game aesthetic on its display when you punch the dial into Corsa driving mode, a variation of sister-brand Audi’s approach to screens. But what makes the Aventador S most beguiling to drive is the delirious sensation of pushing that accelerator pedal to the floor for a few brief seconds. It’s a potent form of intoxication that gets the blood flowing.

Most people will never drive a Lamborghini, and seat time in one of these rare models earns you instant bragging rights. I’ve test driven about 950 vehicles since I began writing about cars, but opportunities to test certain models stand out. Lamborghini is among the more unforgettable. This brand inspired a cult of automotive enthusiasts in the latter half of the last century. Besides being a symbol of excess, the Lamborghini brand has long been an influence on culture. The Verge has noted the funky, futuristics designs created by designer Marcello Gandini made the car a work of coveted geometry. The angular surfaces of the Countach feels like the sharp edges the early personal computer era.

My most poignant memory of driving a Lamborghini was circa 2010, the last year the Murcielago was in production, in Le Mans, France. That day, I also drove an Audi R8, a Ferrari 458, and a Porsche 911. Measured against these other super cars, the Murcielago’s strong but twitchy performance gave the car a sense of fragility. It made a strange throat-clearing noise when it turned. Its raw power was more suited toward a Fast and Furious drag race, where understeer wouldn’t have been a factor on the twisty roads of the French countryside. Understeer, when a car fails to make turns on a sharp angle, was the compromise that Lamborghini had to make for that distinctive design.

But Lamborghini is changing its ways. The Aventador S is evidence of how Lamborghini is using engineering advancement to refine the driving experience.

“If you can see the future, you can write history,” Lamborghini COO Alessandro Farmeschi told us in a briefing before he set us loose on the track to test out its prowess. We were shown an image of what appeared to be a charcoal sketch of a snarling shark and a wicked cobra drawn by designer Eminel Hodzic. Farmeschi said nature and aerospace are thematic inspirations. Yes, the Aventador is a sharky-cobra-rocket-jet hybrid that runs on gluttonous petrol.

Aventador is the most successful V12 in the brand’s history from a sales perspective, compared to its predecessors like the Muira, Countach, Diablo, Murcielago, and 350 GT. But it was these legends that first become ubiquitous in the posters that plastered across thousands of kids’ bedroom walls. If kids still had car posters, the Aventador would earn a primo position, which is why Lamborghini has decided to make it even better, though not quite as quick as the 770-horsepower limited edition 2.3 million dollar Centenario, but just as Instagram friendly.

Farmeschi reminded us of exactly how ill this car’s pedigree is on paper: a ridiculous 217 mile per hour top speed, a V12 engine that produces 740 horsepower (40 more than the Aventador), and a delirious 0 to 62 miles per hour acceleration in 2.9 seconds. He explained the technical performance enhancements, which Lamborghini calls the “four masterpieces:” active suspension, driving mode, improved four-wheel drive, and new four-wheel steering. Lamborghini attributes these improvements to an overall system it calls Lamborghini Dinamica Veicolo Attiva (LDVA). “When all these things are put together we have a brain that collects all the information to manage dynamics on the vertical, longitudinal, and lateral sides,” he said.

Starting the engine is an experience. It’s all in the push of a mounted button that feels like getting ready for takeoff. The addition of four-wheel steering paired with a re-calibrated all-wheel drive system gives the Aventador S a distinct sense of stability and agility to support its long and wide proportions. Later as I weaved my way through orange cones on the slalom course, I saw proof of this improvement as I pulled the wheel with all my might to make tight turns and the car promptly responded by rotating at a sharp angle — goodbye to that memory of understeer.

Its exterior surfaces have also been massaged to produce more aerodynamic air flow, including an aero diffuser and three active rear wing positions. On the track, this translates into focused performance, leaving the driver squarely in control to push the limits, meaning more fun, without worrying about losing control, freeing up space to play with manual paddle shifters. On a hot lap with Lamborghini team driver and former Nascar driver, Kevin Conway, I experienced the stomach-dropping sensation of that extra torque when the revs increased and the erratic jolt of the clutch. It was like living an action sports documentary. The downside of the Aventador S? Most drivers will never be able to push this car to its full potential, even on the track. It’s too freakin’ fast. But it’s certainly fun to try.

In this era, motorsports enthusiasm starts at home with a round of Gran Turismo, where choice is a big part of the playing experience: what car, where, and how. Every car offers a distinct experience to start with, which you can’t do with a real car. This sense of choice is increasingly creeping into sports cars, where suspension, steering, and powertrain can be altered with a push of the button, which makes it more fun to drive in person than a video game.

Lamborghini has offered Sport, Strada, and Corsa modes. On S its added Ego Mode, which essentially allows the driver to mix and match modes of driving, meaning there are 24 different ways you can slightly adjust the way the car handles. And the cool part is that the dash screen changes as you flip modes, offering a fresh cockpit experience to go along with all those high-end sumptuous materials.

What I can’t tell you much about is how this car handles on regular roads. The afternoon I drove was all on the track. (I’m not complaining.) And really that’s not the point of driving a Lamborghini: no one feels good about driving while stuck in traffic, especially in a car that drinks gas with such vigor. That’s when this owner will opt for a self-driving electric car. Or suffer in silence in order to make jaws drop in the name of stunting. Or opt for the helicopter. While we need to think about alternative solutions for our daily drivers, Aventador S makes the case for dessert, meant to be consumed in moderation, appreciated for its sophisticated leaps.

But perhaps what I appreciated most about getting up and close with the Aventador S in the track setting was the interplay between touch, sight, and sound. The exhaust note ripples when you engage the throttle, a rich, rumbly growl unmatched by any automaker, and what makes these cars still have an undeniable appeal. I am generally an audiophile, and my soundtrack is the first adjustment I make when I get behind the wheel. In my short time driving the Aventador S, I never bothered to turn on the sound system. The sound of its engine was enough music for my ears.

Photography by Tamara Warren / The Verge