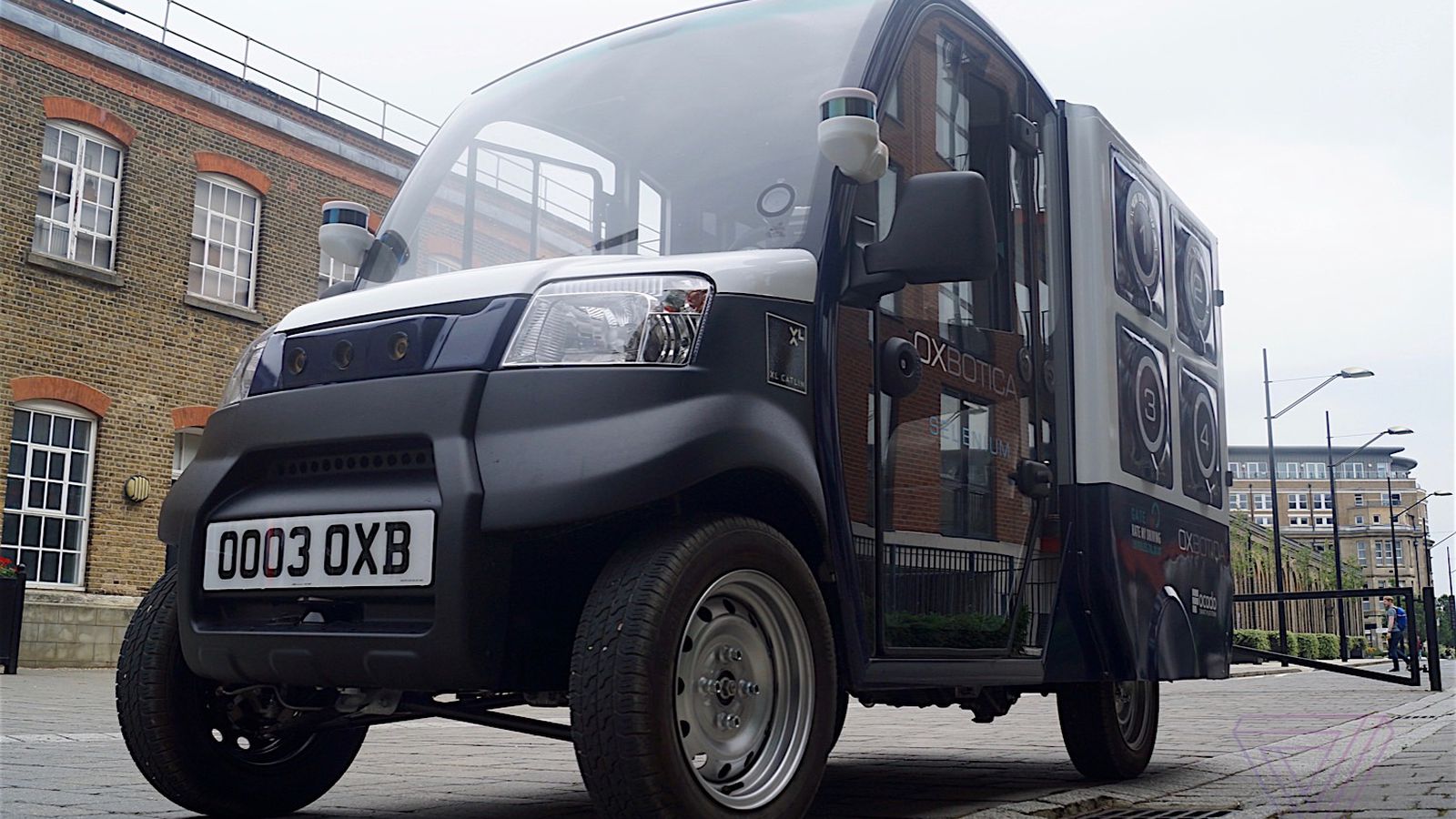 A UK online supermarket has conducted what might be the first self-driving grocery delivery. Ocado, which has no physical stores and delivers food directly from its warehouses, is carrying out a 10-day trial of the technology on the streets of London. Deliveries are made using a mini self-driving truck developed by UK tech firm Oxbotica. Ocado is hoping to sell its setup to other retailers — including in the US.

“We see it as adding choice,” Paul Clarke, CTO of Ocado’s tech arm, Ocado Technologies, tells The Verge. “There are times when people will want their 50-item delivery brought to the kitchen table; times when they will order online and collect in store; and times when they’re coming back from the airport at three in the morning and just want a few things delivered quickly.” Situations like this are when Ocado thinks self-driving deliveries will come in handy.

This week’s London trial is tightly controlled, but offers a solid proof-of-concept. Oxbotica’s “CargoPod” mini-truck holds eight boxes of groceries (compared to 80 in a regular vehicle) and smoothly navigates three kilometers of residential streets, using the normal combination of cameras and sensors. The vehicle itself isn’t without a driver, though: two minders are sitting inside, one from Ocado and one from Oxbotica, to make sure nothing goes wrong. Customers have been able to order their food online as normal and have to collect the delivery themselves, pressing a button on the side of the vehicle to unlock their crate.

“Reactions have been incredibly positive,” says Clarke. “We offer to bring customers’ groceries to their front door, but they say ‘No, no, no, no: we want to come down and meet the animal!’ That may sound frivolous, but I think it’s important. People can be suspicious about new technology, and getting them excited about it is a big challenge.”

One customer I speak to, Abbah Festus, is a little more skeptical. “It’s cool, but it depends on what you want,” he says. “It feels like going to a self-storage locker. You walk in, you have the keys, you grab your stuff.” Could he see himself using it in the future? “Why not,” he says. “It’s quicker than going to the shop.”

Ocado and Oxbotica say their technology should be ready for commercial use in the next couple of years, but both firms stress that self-driving deliveries are a way off. The concept faces the same challenges as self-driving cars (mainly regulatory hurdles), and there’s the extra burden of making things financially viable for retailers. Nevertheless, both firms say the future of transport is definitely autonomous, and companies need to start adapting fast.

Some companies already are. According to a report from The Wall Street Journal, Amazon — which recently bought supermarket chain Whole Foods — has been looking into the viability of driverless deliveries for more than a year now. The US giant is also interested in drone delivery, and conducted its first real-life trials of the technology in the UK in 2016. Other startups are testing small, wheeled vehicles to deliver takeout and other quick purchases, including Europe’s Starship Technologies and US firm Marble.

Ocado’s plan, though, isn’t just to make the service available to its own customers. It wants to sell its expertise as well. The company’s Ocado Smart Platform offers retailers a stack of different logistical tools to choose from — everything from warehouse robots to shopping apps — and in the future, self-driving delivery trucks might be added to this catalog.

Clarke agrees that the technology is currently in its infancy, but says people need to make a “leap of imagination” to see what’s possible when it matures. “We’re on the edge of quite a radical change to society with regards to AI and robotics,” he says. “I’d be surprised if other retailers are not at least thinking about this. They’d have to be asleep not to.”

Photography by James Vincent / The Verge